www.planbiz.com.ng is the consulting arm of African Survey Services (www.afrisurvey.com), a startup company based in the city of Kaduna state, Nigeria.

Primarily, we help governments, companies, academic institutions and individual researchers reach out to people living in Africa online, survey them and get valuable and actionable data. Put simply, we unlock people powered data across Africa.

We also engage in market research and consultancy, with key focus on the Nigerian market. We guide and help clients tap into the booming Nigerian economy and help in setting up viable businesses in the country.

Over the past few decades, rice has become one of the leading food staples in Nigeria, surpassing cassava in food expenditure. Throughout this period, consumption has increased faster than production, resulting in a growing dependency on imports. By 2014, about half of the rice consumed in Nigeria was imported. As the most populous country in Africa south of the Sahara (SSA), Nigeria had quickly become the leading importer of rice on the continent and, more recently, in the world.

The ban on the importation of rice into Nigeria and the recent closure of the country’s borders by the Federal government has exposed the huge gap in rice production that exists in the country.

Prices of rice almost doubled as a result of high demand of the product plus the inability of the current producers to meet up with the growing demand.

There is high demand for rice in Nigeria. With a population of over 180 million people and an estimated national population growth rate of 5.7% per annum ,an average economic growth rate of 3.5% per annum in the past five {5} years, Nigeria has a large and growing market for rice.

Milling is a crucial step in post-production of rice. The basic objective of a rice milling system is to remove the husk and the bran layers, and produce an edible, white rice kernel that is sufficiently milled and free of impurities like stones, sand, husks, etc.

Typically, when paddy rice comes into the mill, it is first per-boiled and dried, and then goes through the following steps:

Brown rice is produced by removing the husk from rough paddy rice. The husk is removed by friction as the paddy grains pass between two abrasive surfaces that move at different speeds.

After de-husking, the husk is removed by suction and transported to a storage dump outside the mill. Husk accounts for about 20% of the paddy weight and an efficient husker should remove 90% of the husk in a single pass.

The hulled/husked rice is passed through a destoning machine where it removes all stones, sands and other impurities from the rice.

White rice is produced by removing the bran layer and the germ from the paddy. The bran layer is removed from the kernel through either abrasive or friction polishers. The amount of bran removed is normally between 8 and 10% of the total paddy weight.

After polishing, white rice is separated into Head/full grain rice and broken rice, and “brewers” by an oscillating screen sifter. Head rice is normally classified as kernels that are 75−80% or more of a whole kernel.

The final resulting rice is then packaged in desired packs after this stage.

This cost is prohibitive and too high for many people that want to venture into the rice milling business.

However, the good news is that like most manufacturing businesses, one can startup on a small scale, at a lower cost, and work towards growing the business to a capacity or scale one dreams of.

We will set up a small scale rice milling plant for you that can produce 10 tons (200 bags) of polished and stone free rice per day.

The rice milling plant will be able to take care of the most important stages in rice milling, which are parboiling, drying, dehusking, polishing and destoning. What most consumers desire is rice that is free of stone/sand, and does not stick together when cooked and the setup we offer does just that.

Other stages of rice milling like grading and colour sorting simply improves the appearance of the final product. However, most small scale rice milling companies in Nigeria do not grade and color sort their rice. Despite that, they produce and sell, with customers rushing to buy their products.

The cost implication for the setup we offer is four million eight hundred thousand naira only (N4,800,000). This cost covers machinery, installation, test run and training for your staff.

The table below gives a detailed breakdown for machinery.

Note: Blower Polisher and Parboiler are imported and available on ground, while parboiler and dryer are fabricated by our technicians and will take about ten (10) days to fabricate. 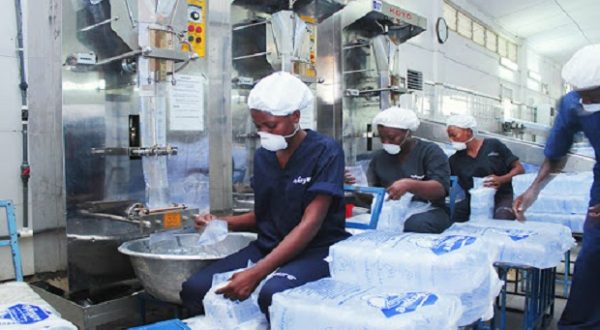 The demand for packaged water is very high because it is consumed on a daily basis, by all people of all ages, race or religion. The raw materials needed to produce bottled water is readily available in abundance in Nigeria.